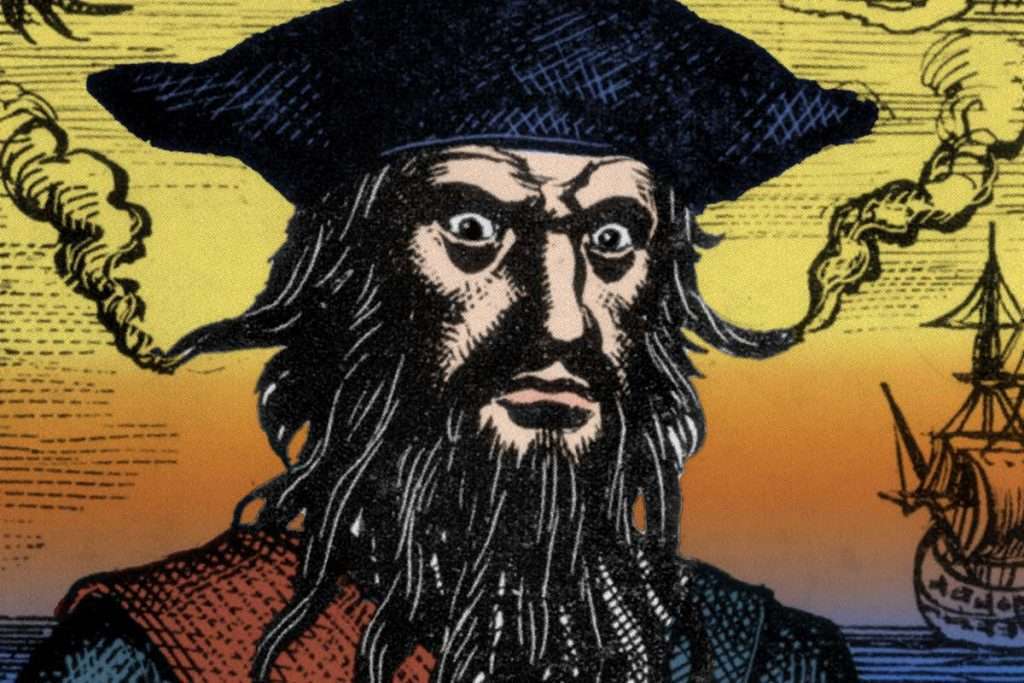 During The Golden Age of Piracy (1689-1718), numerous rogues pursued their lawless and murderous trade throughout the New World. Restrictive laws passed by the British Parliament had made smuggling acceptable and even desirable in North Carolina and the other American colonies. Preying upon lightly armed merchant ships, the pirates seized their contents and sometimes killed those who resisted. Because of its shallow sounds and inlets, North Carolina’s Outer Banks became a haven for many of these outlaws in the 17th and 18th centuries.

Blackbeard was the most notorious pirate in the history of seafaring. With a beard that almost covered his face, he would strike terror into the hearts of his victims, according to some early accounts, by weaving wicks laced with gunpowder into his hair, and lighting them during battle. A big man, he added to his menacing appearance by wearing a crimson coat, two swords at his waist, and bandoleers stuffed with numerous pistols and knives across his chest.

The sight of Blackbeard was enough to make most of his victims surrender without a fight. If they gave up peacefully, he would usually take their valuables, navigational instruments, weapons, and rum before allowing them to sail away. If they resisted, he would often maroon the crews and burn their ship. Blackbeard worked hard at establishing his devilish image, but there is no archival evidence to indicate that he ever killed anyone who was not trying to kill him.

Blackbeard’s lawless career lasted only a few years, but his fearsome reputation has long outlived him. Thought to have been a native of England, he was using the name Edward Teach (or Thatch) when he began his pirating sometime after 1713 as a crewman aboard a Jamaican sloop commanded by the pirate Benjamin Hornigold. In 1716, Hornigold appointed Teach to command a captured vessel. By mid-1717 the two, sailing in concert, were among the most feared pirates of their day.

In November 1717, in the eastern Caribbean, Hornigold and Teach took a 26 gun richly laden French &quotguineyman” called the Concorde (research indicated she had originally been built in Great Britain.) Hornigold subsequently decided to accept the British Crown’s recent offer of a general amnesty and retire as a pirate. Teach rejected a pardon, decided to make the Concorde his flagship, increased her armament to 40 guns, and re-named her Queen Anne’s Revenge (QAR).

Shortly thereafter, the QAR encountered another vessel flying the black flag. She was the ten-gun pirate sloop Revenge from Barbados, commanded by Stede Bonnet, &quotThe Gentleman Pirate.” Bonnet had been an educated and wealthy landowner before turning to piracy. After inviting the Revenge to sail along with the QAR, Blackbeard soon realized that Bonnet was a poor leader and an incompetent sailor. He appointed another pirate to command Revenge, and forced Bonnet to become a &quotguest” aboard QAR, where he remained, a virtual prisoner, until she wrecked six months later.

During the winter of 1717-1718, the QAR and Revenge cruised the Caribbean, taking prizes. Along the way, Blackbeard decided to keep two more smaller captured vessels. When he sailed northward up the American coast in the Spring of 1718, he was in command of four vessels and over three hundred pirates.

Blackbeard’s reign of terror climaxed in a week-long blockade of the port of Charleston, S.C. in late May 1718. One week later, the QAR was lost at Beaufort Inlet. One of the smaller vessels in Blackbeard’s flotilla, the 10 gun sloop Adventure, was lost the same day while trying to assist the stranded flagship.

Before leaving Beaufort Inlet, Blackbeard marooned about twenty-five disgruntled pirates on a deserted sandbar, stripped Bonnet’s sloop the Revenge of her provisions, and absconded with much of the accumulated booty aboard another smaller vessel. Bonnet rescued the marooned men and, with them, resumed his lawless ways aboard the Revenge, which he re-named the Royal James.

In October 1718, Bonnet and his crew were captured near present-day Wilmington, North Carolina, and taken to Charleston, where they were tried for piracy. All but four were found guilty and hung that November (the record of that trial, published in London in 1719, provided researchers with important clues to the location of the QAR site.)

Meanwhile, Blackbeard and his confidants had sailed to Bath, then the capital of North Carolina, where they received pardons from the Governor, Charles Eden. In November 1718, Governor Alexander Spottswood of Virginia, knowing that Blackbeard and his men had continued taking ships long after the period of amnesty had expired, sent a Royal Navy contingent to North Carolina, where Blackbeard was killed in a bloody battle at Ocracoke Inlet on November 22, 1718. During the action, Blackbeard received a reported 5 musketball wounds and more than twenty sword lacerations before dying. Blackbeard had captured over 40 ships during his piratical career, and his death virtually represented the end of an era in the history of piracy in the New World.

Little is known concerning the origin of Blackbeard the pirate. Documents suggest both Bristol and London in England, the island of Jamaica and even Philadelphia as his home. He is said to have operated out of Jamaica as a privateer during Queen Anne’s War (1702-1713) previous to having been a pirate.

– Historical sources vary as to Blackbeard’s real name. Though most publications mentioning the pirate by name over the past couple of centuries have identified him as Edward Teach, the majority of primary source documents written during the time of his activities indicate that Thatch or some other phoenetic derivation (ie, Thach, Thache, etc.), was actually the name he was going by at the time. The name Drummond is mentioned by one early source, but this not supported by the vast volume of other documentation.

– It appears that Blackbeard began his piratical career under the command of Benjamin Hornigold. Though Hornigold’s activities as a pirate can be traced back to as early as 1714, it is not known for sure when Thatch joined his crew. The earliest mention of Blackbeard by name is in the Boston News-Letter in October 1717.

– Thatch and Hornigold captured a French slave ship called the Concorde off the island of St. Vincent around November 1717. Hornigold gave Blackbeard the ship and retired from piracy soon after. Thatch strengthened the armament of the vessel, renamed her the Queen Anne’s Revenge and for the next 7 months used the ship in consort with smaller sloops to harrass shipping throughout the Caribbean and up the eastern seaboard of North America.

– It is not currently known how many vessels Blackbeard captured during his exploits, but a preliminary database compiled by museum researchers currently contains over 45 prizes which can be directly attributed to Thatch’s activities.

– Blackbeard was eventually tracked down to Ocracoke Inlet, North Carolina by the Royal Navy and killed in a brief, but bloody battle on 22 November 1718.

Queen Anne’s Revenge was one of the largest pirate ships to ever sail the Spanish Main. No ship played a more dramatic role in the history of piracy in the Americas. QAR is historically a very significant shipwreck, the earliest yet found in the state, and a very important site in the history of North Carolina.

QAR was Blackbeard’s flagship from her capture in November 1717 in the eastern Caribbean until she wrecked in June 1718 at Beaufort Inlet, North Carolina. Blackbeard used the QAR as his prime weapon during the height of his reign of terror, culminating in his audacious week-long blockade of the port of Charleston (then Charles Town), S.C. in late May 1718. During the seven months that Blackbeard commanded her, QAR is known to have participated in the &quottaking” of at least eighteen ships as &quotprizes.” Archival records indicate that Blackbeard and his cohorts probably removed most (if not all) of their booty of gold and silver when she became stranded and was abandoned at Beaufort Inlet.

QAR’s brief but active tenure as Blackbeard’s flagship makes her of considerable historical importance, but the record of her apparently colorful background prior to November 1717 makes for exciting reading itself. While there is still a considerable amount of research to be conducted on the subject, it is possible that QAR’s nationality and appearance changed at least twice in her relatively short lifetime of eight years.

It appears that she may have been launched in Great Britain in 1710, during the War of the Spanish Succession (called Queen Anne’s War in the American colonies.) While flying the British flag, she may have been named the Concord, with a capacity of 300 tons, and was armed with twenty cannon.

Sometime in late 1710, she was ” taken” as a prize of war by French privateers, and brought into a French port. In early 1711, she was modified &quoten flute” (the configuration of her stern was altered) so that she would be more suitable for use as an armed transport. This change gave her a silhouette similar to Dutch-built ships of that era, thus causing later confusion as to her origin. The spelling of her name also changed, to Concorde.

While we are not yet certain that we are speaking of the same vessel, a Concorde of 300 tons and twenty guns was part of a French squadron which sortied from Brest in the Summer of 1711 for South America. The war was still raging, and Portugal had allied itself with Britain. The squadron sailed to the Portuguese colonial capital of Rio de Janeiro, where the French laid siege to the city, occupied and sacked it, and remained until receiving a considerable ransom in gold before sailing back to Brest, where the squadron arrived in January 1712. At war’s end in 1713, all privateers were ordered to revert to peacetime trade, and the Concorde became an armed merchantman.

The Concorde taken by Blackbeard in the eastern Caribbean in November 1717 is described as a 300-ton, twenty-six gun, Dutch- built “guineyman,” flying the French flag, under a Captain D’Ocier. Some reports say that she was, at the time, heavily laden with gold dust, plate (silver), jewels, and slaves. Apparently, she was sailing from Africa to Martinque when captured. Blackbeard increased her armament to “upwards of forty guns,” and from then until her end at Beaufort Inlet, she flew his dreaded black flag.